When a child or someone under guardianship is exposed to illegal substance abuse, they often also face other coexisting obstacles to a normal life – abuse, neglect, violence and other vulnerabilities. Substance abuse is a disease, one that often prevents adults doing what is in a child’s best interest. This environmental exposure hair test for children will identify a child’s exposure to drugs.

This environmental exposure test is the only drug test designed to detect passive exposure to drugs as well as both native drugs and drug metabolites in a hair specimen. Drug metabolites are produced in the body only if drugs have been ingested. Children in drug exposed environments are most often not drug users themselves, so drug metabolites are typically absent in a child’s specimen when tested. However, the hair, like a sponge, can absorb non-metabolized drugs (native drugs) if it is exposed through things such as touching or being in contact with drugs or drug users.

A hair exposure test can provide evidence of drugs in a child’s environment for the past 3 months. A positive test result suggests that the child has experienced one or more of the following:

DRUG PANELS INCLUDE THE FOLLOWING 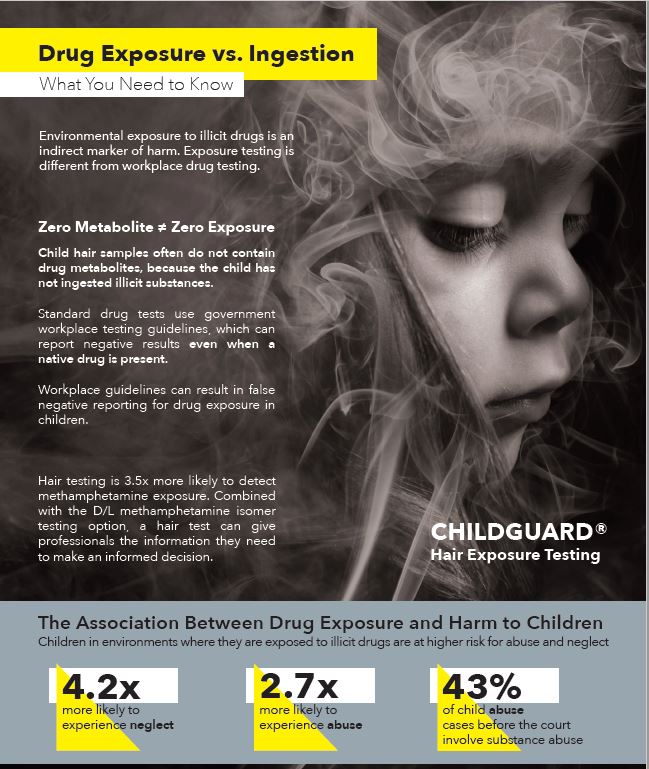